Born in 1966 in Deventer, the Netherlands, Janet finished her ‘official training’ at Groningen University. She started her own company Ossebaard & Janssen - Training and Consulting Group at age 24 and sold it 10 years later. From that moment on, she focused her entire energy on the full-time research of the crop circle phenomenon. 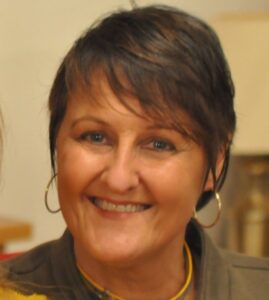 She gave lectures across the world, wrote 4 books and co-produced 4 documentaries, one of which won an EBE-award during the Laughlin Nevada Film Festival. Her work expanded towards the UFO phenomenon and three ancient civilizations that kept popping up in the crop circles: the ancient Sumerians, Maya and Egyptians. In 2002, she won the Frontier Award for her work in the field of ‘Frontier Sciences’. She set up a Crop Circle Research Center in the Netherlands, which she wrapped up by the end of 2019.

In November 2017 Janet got pulled towards the mysterious appearance of Q. The Q-posts fascinated her madly and after 2 years she started giving lectures about the topic. She saw a direct connection between Q and the crop circles. In December 2020 Janet decided to leave the Netherlands, after realizing that her country had turned into a full-on police state. She was censored and monitored to the point of parliamentary questions being asked after one of her interviews and having the police on her doorstep due to her work in general.

She left with Cyntha, whom she had met in the spring of 2018 during one of her presentations. From that moment on, they have been living as nomads, changing house every other 2 months for safety reasons. No cell phones, no tracking devices and only armed with fully secured laptops. That’s when their research into the Cabal, shadow governments, plus the identity and purpose of Q skyrocketed. Janet produced the first 10 parts series The Fall of the Cabal in 2019, and the Sequel (a work in progress) followed as a result of combined forces (Janet & Cyntha).

Right now, Janet & Cyntha are working on part 24 of the Sequel. It is Janet’s dream to combine all of her findings over the last 3 decades in one explosive ending of the Sequel to the Fall of the Cabal. She is currently learning ancient Sumerian in order to be able to understand the world's oldest language, as she is convinced that what happened in Sumer a long, long time ago, holds the key to the answer of every single question she asked herself since childhood. 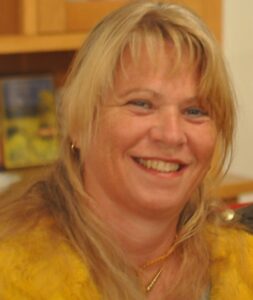 Born in 1973 in Deventer, the Netherlands, Cyntha spent her childhood in Zoetermeer. Her childhood was marked by sexual ritual abuse, by surviving and trying desperately to blend in. She subconsciously ‘deleted’ her most extreme memories and found her way in life.

Cyntha finished her official training in Economics in 1995 in the Hague. Her graduation project included a study into the quality of criminal analysis in the Dutch police force. She subsequently started working at the Regional Police Headquarters in Rotterdam, where she created a new function: Financial Crime Analyst. This encompassed a new way of criminal research, by means of ‘Following the Money’. She published three booklets about economics and analytics and gave lectures to other crime analysts.

After leaving the police force, she became a management trainee at an insurance company, but she realized soon enough that this was not her path. She decided to follow her heart and work for Doctors Without Borders (MSF) in Amsterdam headquarters, financial department. As such, she travelled to Afghanistan (1999) and Lebanon (2000).
In the summer of 2000, Cyntha collapsed, probably due to her traumatic past.

Years went by in which she started a family, became a Dru Yoga teacher and energetic therapist. In 2012 she realized that ‘the system’ had caught her and her children in its trap. She decided to leave the country with her husband, their two daughters, and their pets. They travelled throughout western Europe, living in all sorts of places, meeting all sorts of people. She homeschooled her children, a decision she never regretted...

After meeting Janet in 2018, her life turned upside down. Janet asked questions about her past, after which – eventually – her horrid childhood memories came back to her, one by one, until the entire cesspool was opened up. Cyntha divorced and started a long and painful road to healing, aided by the famous Dutch trauma therapist Martin de Witte.

As Janet worked on the first series of The Fall of the Cabal (2019), Cyntha started an in-depth study into the Q posts and the Q map. The Sequel was inevitable.
Due to the political situation in the Netherlands, Cyntha had started travelling again, this time with Janet. “Working with Janet is like working with your other half. We are a perfect match; we both bring in our own expertise and we are both motivated to the bone to help take down the Cabal by exposing the evil in this world.”

Waking up humanity, re-writing history, healing herself from her past, so she can help other victims of ritual sexual abuse in the near future… all has become Cyntha’s life's work.

“In the end, we do this for the children!”

You can ONLY find us on Bitchute and Telegram.